In what is best described as a pink-walled nightclub somewhere in Milan, yesterday afternoon Alessandro Michele unveiled his SS17 Gucci collection. Models walked a signature Gucci Web red and pink striped carpet (the in colour-combination this season) that snaked through a room of pepto-bismol pink velvet banquettes, with walls clad in yet more pink curtains, 250,000 sequins and fringing, and partition walls built of pink mirrored tiles. The models were somber and serious, as though they had gotten all dressed up but had nowhere to go. It was a game of smoke and mirrors as they appeared through the smoke that shrouded them, meaning sometimes the audience had no more than a glimpse of a silhouette through the fog. The show was entrancingly mysterious, with Florence Welch (of Florence and the Machine fame) reciting English poet William Blake’s “Songs of Innocence and Experience” to a tempestuous soundtrack of violin and drums. A little anachronous for an Italian heritage design house? Not so, as Michele has consistently professed his love of all things British, demonstrated here with words emblazoned in Old English script and British botanicals embroidered onto various pieces of clothing. These are the five things you need to know about the Gucci show. 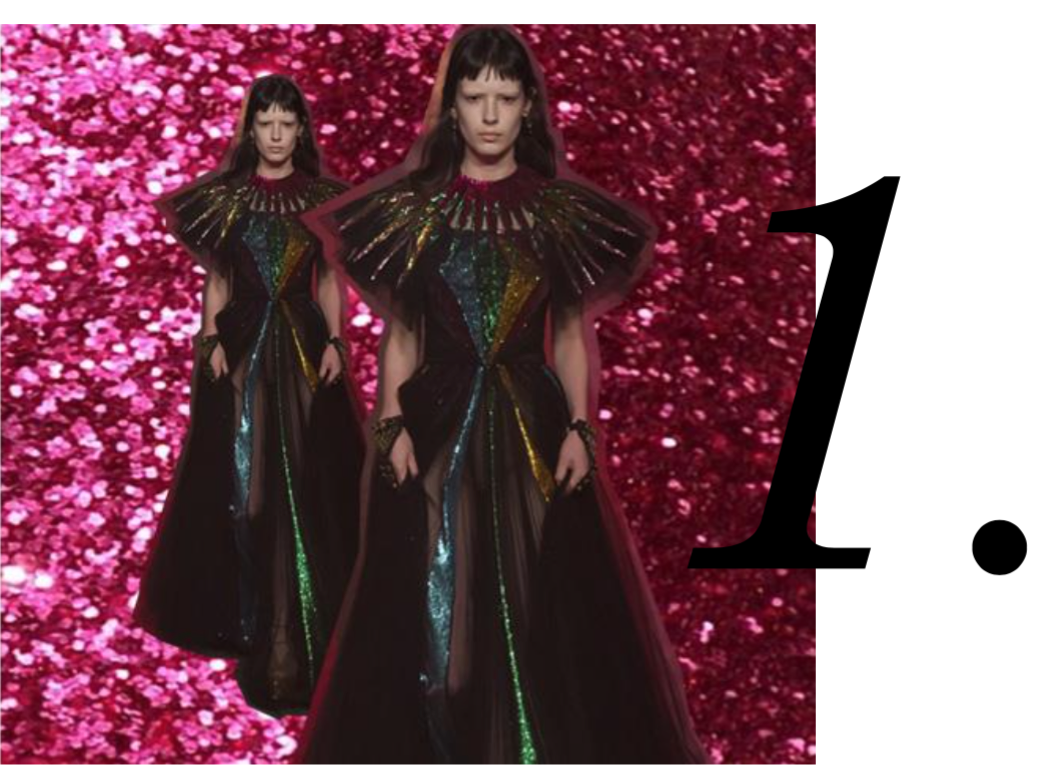 Maximalist ruffles, bejeweled bodices, leather epaulettes, embroidered sleeves, pearl buttons, pleats, sequins, jacquard, applique, Astrakhan and tinsel. Oh, and masses of jewellery. The Gucci signature of more is more was cemented yet again under the creative direction of Alessandro Michele. All of our favourite Gucci staples were updated with yet more embellishments – the Dionyssus handbag, the loafer and slogan t-shirts walked the runway as Michele’s geek-chic tribe clutched Animalier bags with subtle updates, including studs in the place of pearl heels and flatforms with chinoiserie soles. 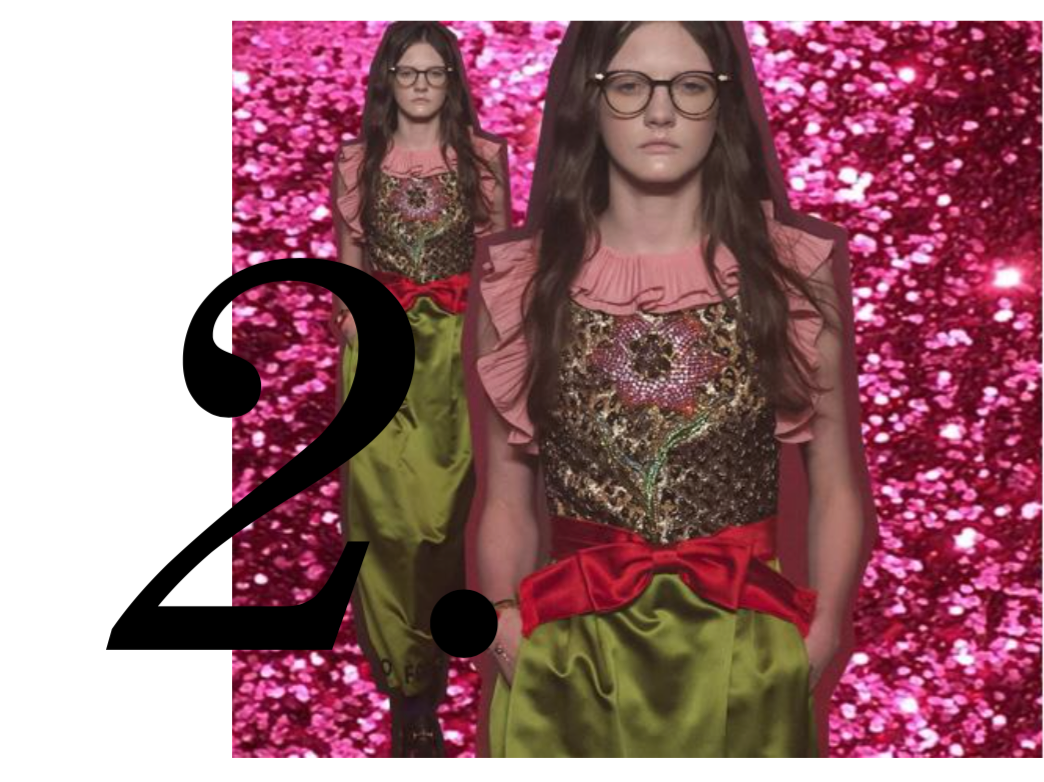 From hand-held vanity mirrors that were in fact clutches, to detailed sequin and embroidered sleeves crafted to look like pineapples, to intricate feather-work, to diamante rings spelling out “LOVED” (there was script everywhere in this show), from the set to the earrings, the whole thing glittered. A sequined trompe-l’oeil bow at the neckline of a dusky blue chiffon dress with sunbeams dancing across each frill, a dragon curling around the hem of a skirt. We particularly loved the lamé two pieces, worn with PVC socks and strappy stilettos. A look more like couture than RTW, and only for the very brave. 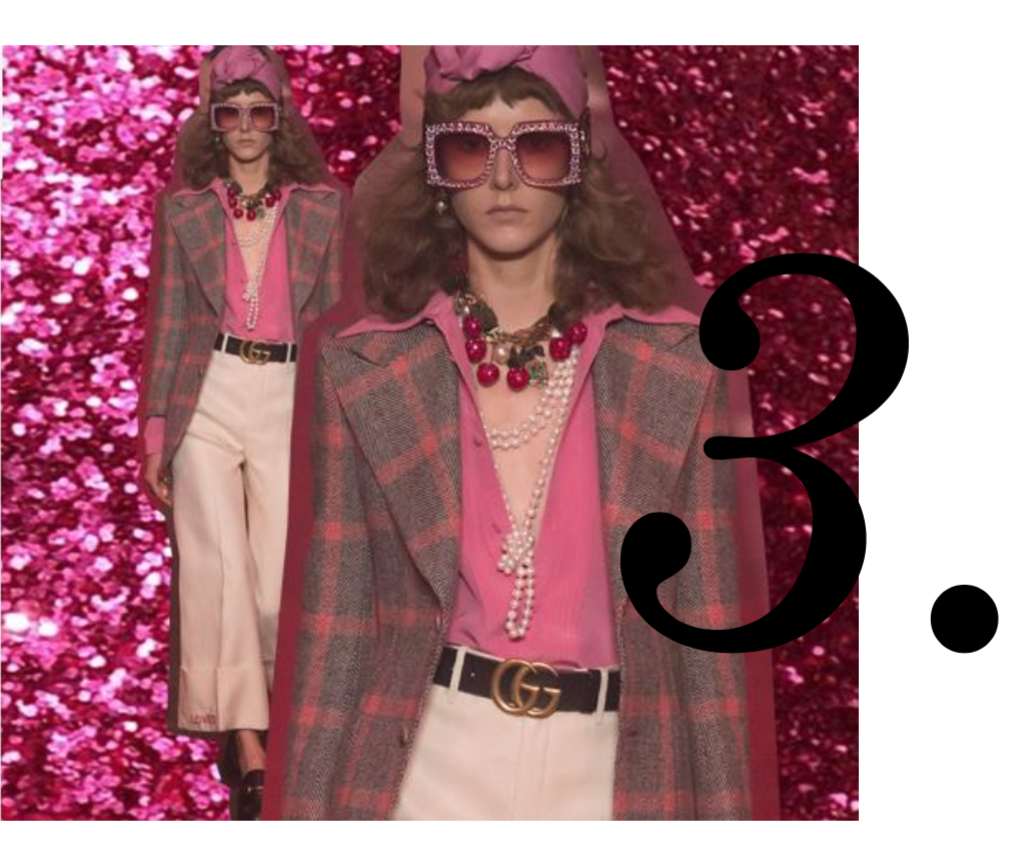 The 1980s found its way into this latest Michele collection like no other before. Silhouettes were exaggerated, with boxy suits, one of which included chino shorts perfefct for spring. A double-breasted, floral jacket-dress worn with tracksuit bottoms seemed to bring the working-class estate in line with the yuppies of the era. There was something very Diana about a peplum, one-sleeved blue cocktail dress with ruffles along every hem, whilst Thatcher would have happily worn a knitted three piece with a huge satin pussy bow at the neck. Never one to limit himself with a single theme, these were worn with black velvet shoes with patent heels – apparently worn by street walkers in Venice in the 15th century (apparently they needed the height in a city built on water, to prevent their feet becoming wet.) 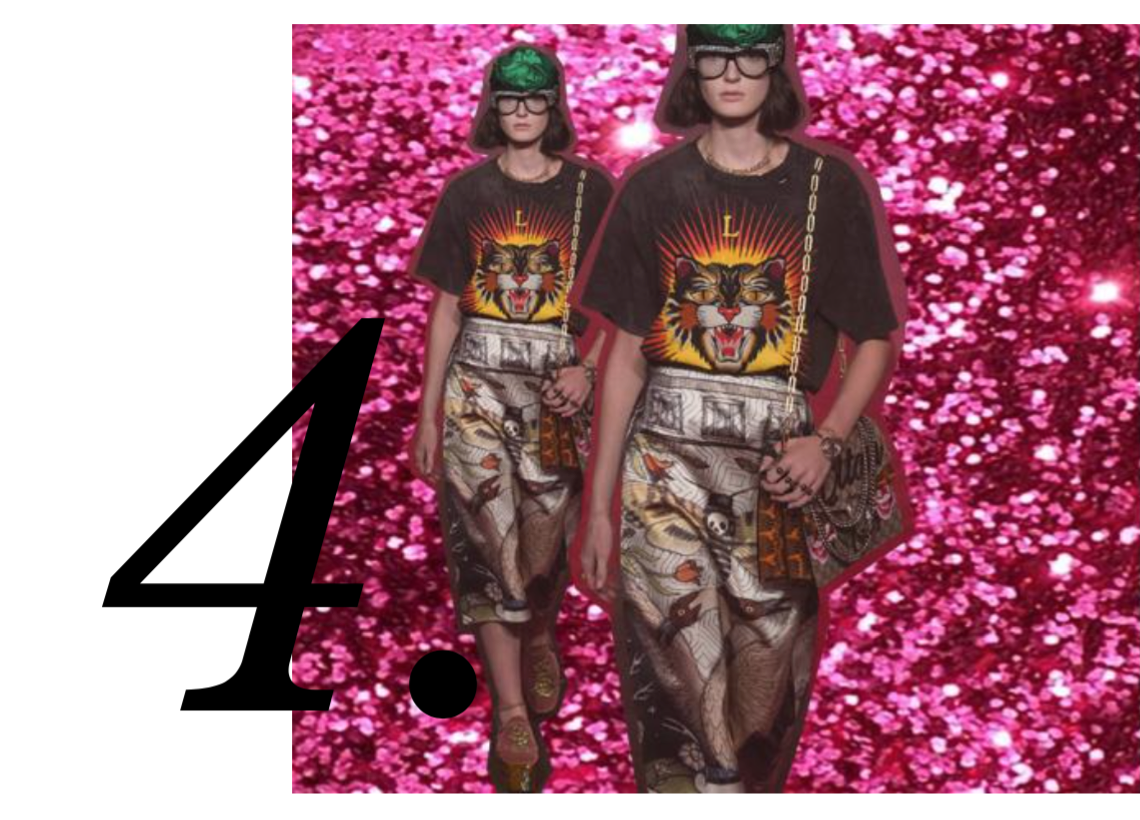 The Gucci design team collaborated with artist Jayde Fish on prints for the collection. Hours of work were poured into reimagining some familiar Gucci tropes. Transformed into tarot- esque symbols, the usual flora and fauna, snakes and monkeys, and even a portrait of Michele himself found their way onto duchess satin skirts and knitted cardigans. Particularly gorgeous was an intarsia fur coat complete with zebras and a white fur with blood red slogans scrawled across it. Aside from the outrageous pink lame jumpsuit (which appeared to have fins), we’re coveting the silk pyjama sets, crepe culottes (with “LOVE” embroidered along the hem), herringbone jackets and boucle skirts. 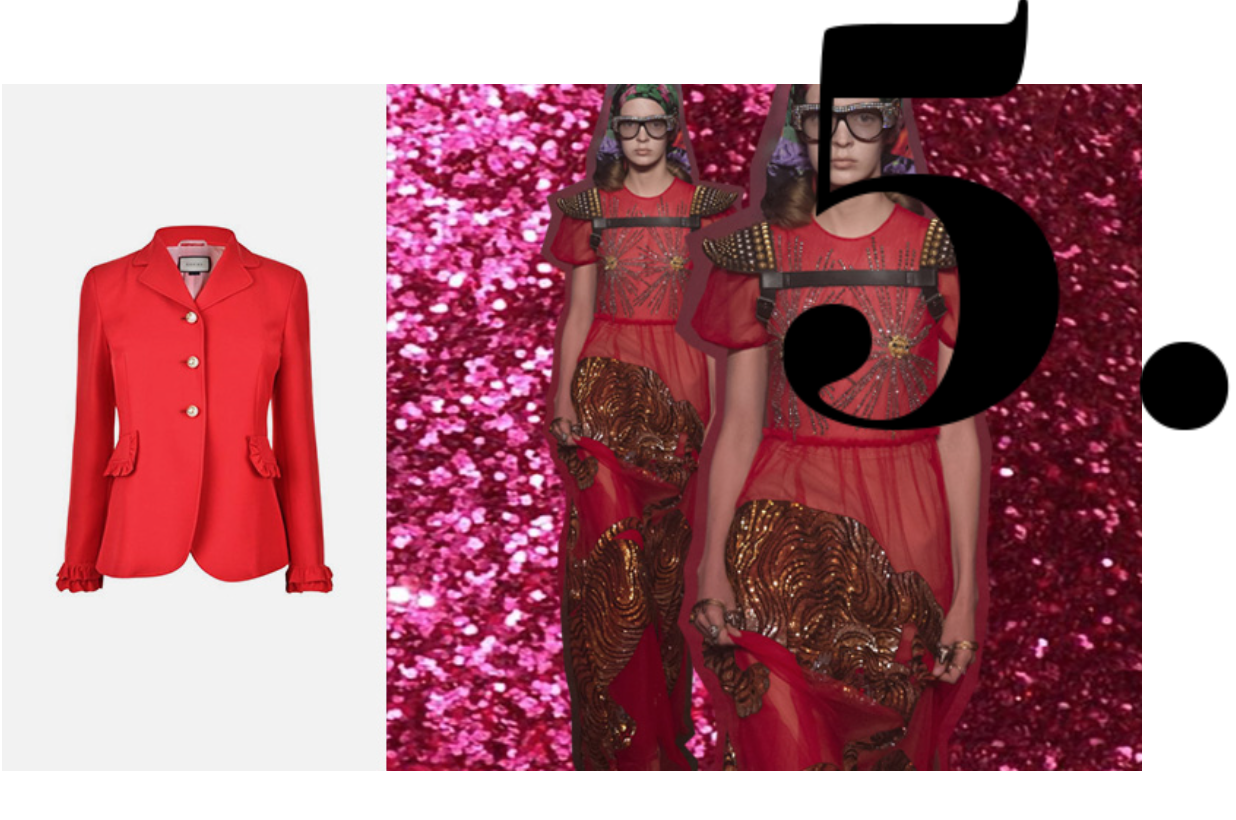 By now we all know that Michele likes to reference multiple eras and cultures in each collection. In his own words “I don’t like to take one idea as inspiration,” he continued, “instead I think of my collection like a song; I’m looking to find the right sound. The right language.” This show was no different – aside from 12th century Old English, Henry VIII’s court, ‘70s disco, ‘80s power dressing and New York street kids, there was a distinct far- eastern theme, with magic lanterns on the walls, Dynasty-style dresses, Chinoiserie trouser- suits and paddle fans bearing the words “Modern Future” (despite their distinctly antique appearance.) Michele has moved across centuries and continents to bring us this sumptuous, exotic and glamorous collection.